Every week, the Steward team at the Mansion House cooks up a different tasty recipe from the 18th century in our restored historic kitchen. Marzipan hedgehogs are always a big hit with our visitors, especially the little ones!

This recipe comes from the most popular cookery book of the 18th century, The Art of Cookery Made Plain and Easy by Hannah Glasse, first published in 1747. Copies of this book graced homes up and down the country and the English-speaking world, including a copy owned by Martha Washington, wife of George! It is very likely that this book would have been read by the various cooks, as well as many of the Lord Mayors and Lady Mayoresses who lived in the Mansion House in the late 18th and early 19th centuries. 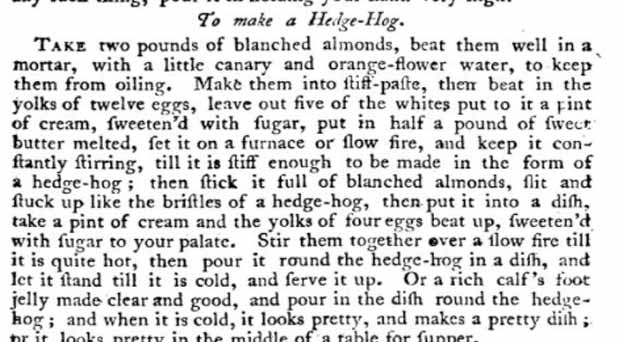 Recipes from the past can be difficult to follow, and often the ingredients don’t seem to make much sense. For example, this recipe calls for twelve eggs- which seems like a lot! This is because in the past, eggs were much smaller than they are now. Modern recipes do not need to use as many eggs. Likewise, some steps in Hannah’s recipe aren’t necessary to a modern cook, such as pounding and bleaching the almonds, as now we can usually acquire ground and flaked almonds from the supermarket.

Marzipan was very popular in England, especially between the late Medieval period and the 18th century, because it fulfilled the sweet tooth desire for sugar without being too expensive. ‘Marchpane’ dishes in the Elizabethan court were made of almond paste and sugar and were usually elaborately moulded and decorated. These Georgian marzipan hedgehogs are part of that same tradition, just as marzipan fruits and other shapes are still traditionally eaten today. Marzipan also used to be used to cover luxurious Twelfth Night cakes. In the Victorian period when German Christmas traditions became popular in Britain, Twelfth Night cakes more or less disappeared. However, the marzipan made the journey over into the traditional layer, under the sugar icing, on the Christmas cake. When sugar sculpting became more popular, the interest in marzipan started to dwindle, and is now something of a divisive taste!

We love making marzipan hedgehogs in our kitchen, and so we have developed a modern version for you to try at home! The consistency is much like modern, shop-bought marzipan, but is far more buttery and tastes very strongly of almonds.

If you want to serve this in the Georgian style, pour custard around your hedgehogs, or if you’re feeling adventurous, try Hannah Glasse’s suggestion of jelly! You can speed this recipe up by using pre-made marzipan, available from most good supermarkets.

If you don’t want to use eggs in your recipe, water or coconut milk can be a good substitute. If you have a nut allergy, you can substitute semolina for the ground almonds or even use sugar fondant icing to make your hedgehogs.

Why not try decorating them with chocolate sprinkles instead?

If you’ve tried our recipe, please send us photos of your creations and we’ll post them on our website!